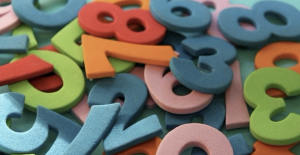 Numbers are drawn symbols, or figures, that represent something else. The sign 2 is not just a slinky line; it is a collectively recognized and agreed upon symbol for two of something. Throughout history, that representation has made life a lot easier for transactions among people — it’s a lot easier if I write “I owe you 2 cows” than bringing the cows physically into the conversation and parading them around and forcing you to see that there are indeed 2 cows.

Numbers are also the symbols used in counting, a numerical system designed to add things up and get an idea of a total, which turns out to be of common importance. We need to know how much money we have, how many people live in some city, and things like how many jelly beans are in that jar.

Humans have been counting things ever since they scratched lines on rocks, bones, or clay tables to keep track of their herds or whatever else they wanted to tally. Today we count numbers for everything — finances, inventories, family size, age, or blood count — and all day long.

Because numbers actually represent whatever we are tracking — people, money, time — they are real, tangible, and have consequences. And because they represent reality, we trust these numbers that often guide our decisions and lives.

But some people decide not to trust numbers and forget that numbers, on their own, don’t have the capacity to lie. They have no conscience, agency, morality, nor opinion; they just represent what others might do or think.

Given the place of counting and numbers in our lives, I suggest there are a few things to remembers when looking at, analyzing, or acting on the strength of whatever the tally might show.

1) Counting is a basic human function. It means looking over a bunch of stuff and sorting it into categories, something humans love to do.

2) We sort and count things because that action orders our world. And it helps us solve problems such as, “I love those boots. Should I buy them? Oh! Wait! I already have 3 (6, or 15) pairs of boots, so maybe not.”

3) Learning how to count numbers is partially innate. Toddlers who can barely speak in sentences hold up a few fingers to signal their age because they grasp that those fingers are symbols representing years. Two fingers, the word “two” and the number 2 is the first cognitive step in recognizing that real things, like years passing, have happened because we can count and record them.

4) Counting is also learned. Parents are always asking kids, “How many?” which encourages them to count, hoping for the right answer and the clapping.

5) Knowing numbers and counting are essential for communication. One of the first things we learn in a new language is numbers which facilitate buying souvenirs in a foreign country.

6) Much of what we count is money; counting dollars and cents essentially runs our lives. The end game is using that count to buy a lot of stuff, at a discount which is also a bunch of numbers.

7) Numbers also represent our personal selves, such as a social security number or a telephone number. We don’t count these numbers per se, but we know ourselves through them and protect those numbers from others.

8) Counting numbers can also underscore our thoughts and opinions This happens, for example, when we check a box on a piece of paper and that answer is added to a particular category. Life often (especially lately) seems like a daily slog of headcounts.

9) The process of putting choices into categories results in majority and minority figures. These mathematical summations are based on real live decisions made by real live people who declare themselves as belonging to one or another of the category in question. It’s a pretty straightforward process going from what a person marked as their belief or desire and allocating that decision into one or another category. No need for drama here because the counts are real, tangible representations of whatever is being counted. They just are and there’s no way of getting around it.

10) When those reviewing the counting don’t recognize the reality of the system, or if they scream to throw out some of the numbers representing some identities just because they feel like it, those anti-numbers folks are acting as if the results of what they are counting is fake. But it couldn’t be more anchored in reality

Numbers don’t lie, so watch out for that sort of false accusation.

Born for Unity, Divided by Culture

The Most Selfish Culture on Earth-Or Maybe Not