When the Public is Fed the Wrong Information About Primates 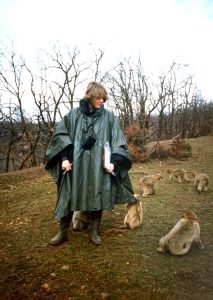 A recent article about Japanese macaque monkeys went viral, even getting exposure on Stephen Colbert, because of its provocative headline: “Love Triangle Challenges Reign of Japan’s Monkey Queen.” But that idiotic headline, based on inaccurate reporting, was simply fake news. I know this because as an anthropologist, I spent many years observing and searching about macaques and the reporter doesn’t seem to have any idea how these animals operate. When someone is educated and experienced in a profession or a job, there is nothing more annoying, exasperating even, than seeing your field of work or study misunderstood and misinterpreted by the public or the media. That annoyance is especially keen these days because it doesn’t take much — internet anyone? — to find out the correct information. It also rankles when inaccurate stories are used to underscore some human stereotypical notion that a reporter uses for a hook.

In this case, the story is about a female Japanese macaque or Snow Monkey, and how she rose in rank, presumably passing all the adult males because the author thinks the usual macaque ranking is linear, with females always below the males. And so, when a female becomes the “leader” of the group we should be shocked — oh my isn’t that amazing? The insinuation here is that since macaques are close genetic cousins of humans, maybe even human females could have a chance to rise in some corporate hierarchy to the top. What a notion!

Secondarily, the article warns that this female Japanese macaque who is suddenly “in charge” (of what exactly?), might cause havoc, even drop in the hierarchy, during mating season if the males fight over her. In other words, she might have gotten too big for her monkey breeches.

The thesis of the article is that male monkeys are in charge of the group and that this female will suffer the consequences of her uppity behavior. Sound familiar?

But it’s all rubbish. Annoying rubbish. I know because of the endless hours I have spent following four different species of macaques in the field, in large fenced outdoor cages, and at a tourist park much like the one in the article.

There are 22 different species of the Macaca genus, and they are spread across the world. Macaques are of interest to anthropologists and primatologists because they can provide clues about the evolution of human behavior. Macaques are not as genetically close to humans as chimpanzees, but we do share many broad group and inter-personal behaviors with them because of our shared evolutionary history. That’s’ why people like me have spent so much time watching them and analyzing their behavior.

Ironically, we know so much about this type of monkey because Japanese macaques (Macaca fuscata) were the first of this genus to be studied long-term. Starting in 1951, Japanese primatologists have been observing groups of these monkeys on various islands of Japan and at other locations, identifying individuals, and noting their behaviors. Westerners were late to the show with macaques because this research was published initially in Japanese, in a Japanese primatology journal. But eventually, in the 1970s or so their work was known, and it sparked a very long and ever-growing list of research projects, fields sites, and academic articles focused on various species of macaques done by primatologists from all over the world.

I’ve spent a lot of wonderful hours standing among macaques and I am surely biased about these monkeys. They are easy to find, fun to watch, and incredibly fascinating. Every day I saw something interesting and was drawn into their complex inter-personal machinations. It was clear that they knew everything about each other and used that information as they went about their daily lives. Macaques also share many broad patterns of behavior with humans, behaviors such as attention to kin, strong mother-infant bonds, female preferences in mate choices, social hierarchies that are continuously reinforced, and they live within a minute-by-minute interconnected network of social relationships, just like we do.

Macaques are also scrappy little monkeys able to survive and gather enough to eat in forests, deserts, mountains, and on beaches. They also often do just fine when their habitats are encroached or destroyed. As highly adaptable and clever animals, they take over temple grounds and eat the offerings set out for the gods, scamper through villages and find the garbage dumps, or open kitchen windows and help themselves. You have to admire their pluck, even if you have to run away from a large male who tries to grab your sunglass or scream and jump when a curious juvenile picks through your purse looking for a snack. Right now, macaques are the most ecologically and globally widespread primate group after humans. And when the real apocalypse comes, it will surely be cockroaches and macaques that live to tell the tale.

Although there are differences among the various species of macaques, decades of research have also provided an overarching pattern of their sociality which is nothing like the recent article suggests. Macaques, and their close genetic cousins the baboons, have a “female-bonded” group structure which means females stay in the groups where they are born and males typically leave at puberty. Females form their own social hierarchy with mothers, daughters, and sisters clustering together at some position, and these relatives hang out together and support each other during fights. You can call them “matriarchal,” which is not quite right, but that word does reinforce the solidity and power of females in macaque group behavior.

There are many more adult females than adult males in these groups because some males never make it into a new group. Instead, they become solitary or spend their lives moving from group to group. But male macaques also have a strongly reinforced hierarchy among themselves, a rank and file separate from females. Males and females, of course, spend time together, especially young sons with their female relatives, but individual connections and competition are usually within each sex, and hierarchies are gendered.

The fact that the female Japanese macaque in the story was batting around males surely speaks of her power, but it is meaningless to say she is the alpha of the whole group. She is simply the highest-ranking female which gives her access, and sometimes superiority, over some males which might be advantageous at certain points. Of course, the usual macaque gendered hierarchical separation might have been compromised in the enclosed park of the recent article, especially if the animals are crowded together and forced to be in very close company. But I doubt it. I’ve watched macaques in enclosures that are much smaller than that park and the animals acted just like wild macaques, sticking to their ingrained pattern of separate but equal lives, interacting and hanging out together a bit until the mating season when they interact much more often.

That’s why it is really annoying to have their behavior reduced to some worn-out feminist trope, trying to spark awe and surprise that a female macaque might be high ranking. There always are, and always have been, high-ranking female macaques who dominate the group and push males around, if they feel like it. Yet another broad pattern of behavior they share with humans.

Littering — A Main Occupation of Our Species