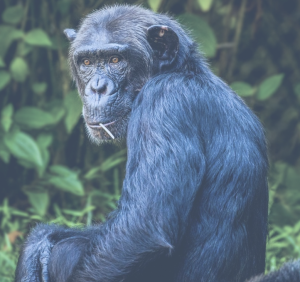 Motherhood is intense. A new mom not only has to recover from the birth and start breastfeeding, which is behaviorally and physically demanding but she also (usually) becomes life for a growing toddler. Children start out greatly dependent on their mothers, but that attachment wanes as kids grow up and become independent. But mothers can have a deep and lasting effect later in life when they contribute financially, allow adult children to live at home, or give emotional support even when their kids are fully grown and have children of their own.

A group of primatologists headed by Catherine Crockford of the Max Planck Institute for Evolutionary Anthropology is now suggesting that long-term maternal influence, especially on males, is not just confined to humans. Chimpanzees are the most closely related primate to humans and our interest in them is tied to that relationship. When humans and chimps share a characteristic or pattern of behavior, we can safely assume there is an evolutionary basis for its appearance, that the selective forces at work must be similar for chimps and humans. Chimpanzees, therefore, have been observed intensely, over decades, and across many field sites by primatologists, anthropologists, and animal behaviorists. As a result, we have a pretty good idea of what growing up chimpanzee is all about.

Mothers chimpanzees nurse for 4–5 years and babies are carried about until the chimp toddler stage when they ride on Mom’s back; mothers and little chimps are in close proximity all the time. Mothers attend to their young but unlike humans, they don’t actively teach them; little chimps learn mostly by observing their mothers. This tight relationship eases when chimpanzee males mature; they socially mature around ten years of age but they don’t become independent, that is, basically disconnected from their mothers, until age twelve. And unlike most primates, female chimpanzees leave their natal group at sexual maturity while males remain in their mothers’ area. Those males then form close relationships with each other as adults; they hunt together and patrol territorial boundaries. Since males never leave, the important point is that mothers have a long time in which they can potentially influence their sons.

Using paternity data from three groups of chimpanzees living in Taï National Park, Ivory Coast, the researchers compared the number of offspring fathered by males who had lost their mothers young (calling them “orphans”) with males who had surviving mothers still in the group. They already knew that the highest-ranking male, the alpha male, fathered a disproportionate number of offspring. Their forty-eight identified paternities of young chimps who made it to at least two years of age revealed that male orphans tended to spend less time at the alpha position than those who grew up around their mothers. As a result, those orphaned males sired fewer offspring. Also, orphan males fathered their first infants about three years later than the other males, meaning they had short reproductive life spans.

There also seemed to be an interaction between being an orphan and fertility. Opportunities for copulation vary among male chimps as they go up and down the dominance hierarchy and so social life can have a dramatic effect on who gets to father infants. But the researchers took that all into account and discovered that even when they did copulate with fertile females, orphan males still fathered only half the babies they could have.

We know that the death of a nursing mother is death for wild animals such as chimpanzees, but it’s a surprise to realize that having a mother-in-place during adulthood, when she is no longer feeding or caring for an offspring, can affect something as evolutionarily potent as adult reproductive success.

These data might also point to the importance of having a mother, even one that ignores you, during human evolutionary history. Human boys are obviously dependent on their mothers, but they, too, grow into independent adults. Of course, we know that many adult men continue to be attached to, even dependent on, their mothers, but now there is the possibility that mom-son attachment might be evolutionarily advantageous.

Are Humans Designed to Trash the Planet?

The Real Reason We Need Each Other