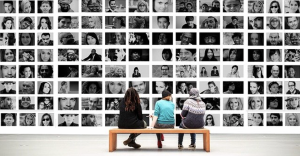 We are living in difficult and confusing times. Over the past year, we have been pulled together battling a global pandemic while at the same time falling apart because of disturbing, dangerous, and ubiquitous culture wars.

The pandemic obviously unites us. Covid-19 has jumped from person to person, oblivious of individual identity, community or country affiliation, race, ethnicity, age, or gender. In its contagion, the virus dramatically shows that everyone is prey to the same germs and that we all have the same fears about sickness and death. We are also united in grief for those we love as well as strangers who are also suffering losses in other parts of the world.

The vaccines also point to our unity because they work the same for everyone. Through this massive global health effort aimed at vaccinating almost eight billion people on the planet, there is a deep sense of connection with our fellow humans. More telling, if even a few people remain unvaccinated, we are all at risk, no matter if those people are next door or across the globe. We are one species; the virus knows it and the vaccines confirm it.

But throughout this scary year, especially in the United States, we have fractured along lines of identity, politics, religion, and race in dramatic and dangerous ways. We are repeatedly pitted against each other, awash in a sea of strongly held personal beliefs that are screamed across social media and across the street. Every American citizen has been challenged for their views on guns, voting rights, climate change, government oversight, and individual rights that some claim are more important than what is good for the whole. These are, indeed, culture wars, conflicts not born of biological differences because in reality there are none. Instead, the vagaries of culture, that shallower layer of humankind, has dramatically torn us apart, sometimes resulting in the murder of those seen as “different,” even though these so-called differences are superficial and meaningless.

We are one, and yet not one. Why is that? Why is a species so obviously connected also prone to division along so many issues during a time of duress? Is this type of splintering into groups normal for us, or an aberration? Is being connected as a species better, or worse, than looking out for ourselves and those of our constructed in-groups?

As an anthropologist, I recognize these two forms of humanity, the unity, and the division, and I understand their roots. Our collective paleontological history defines us as Homo sapiens sapiens, one genus, one species, and one subspecies. Our ancestors split from a common ape-like creature about 5 million years ago and from there, our kind evolved into what we are today. Together, humans evolved in Africa and then spread across the globe. Modern humans, ones that would fit in if they walked down the street, have been around for over 200,000 years, or 10,000 generations. As a result of our shared evolution, we all have the same body type, walk on two legs, have large and complex brains, acute vision, and sophisticated puzzle-solving skills. All humans need social interactions, compassion, kindness, and love. We are biologically, physically, and emotionally connected because we do indeed have genes in common with each other. Like all other species on earth, we evolved together as one kind of creature.

Our species also has an Achille’s heel called culture, that which is learned rather than imprinted specifically by genes. The capacity for absorbing those non-biological cultural layers, and our heavy dependency on what culture brings, has, of course, also been selected by evolution. But, that extra mantle, played out in the specifics of culture, also shapes our lives, sometimes even more significantly than biology.

The intense refracting power of culture explains what humans believe in, desire, and hope for, and how people make decisions across every aspect of daily life. Items such as language, religion, morals, traditions, creativity, rituals, and the ingrained beliefs that guide our thoughts all day twist humans into unusual animals; culture is a tricky hand that bypasses evolution and has a life of its own.

Often, my anthropological training leads me to evaluate these two layers, biology and culture and put them into play when ruminating about how people behave. I start by asking “Is this true for all humans? Something about our shared evolutionary nature?” To answer that question, I look for evidence across the world: “Is this phenomenon part of all cultures or specific only to some, or one?” If it seems ubiquitous, there must be a shared evolutionary basis for that behavior or phenomenon, and I assume it has, and may still have, evolutionary advantages for our kind. If what I am interested in is not universal, I bring in the second layer, culture, and know that whatever I am trying to illuminate has been influenced by where a person is born and grows up, by experience and learning.

The result of this questioning means nothing, in a sense, but it does give a perspective that allows for unity and disunity. The mash-up of our essential nature with learned culture is who we are. Accordingly, each moment of the day is a mixture of biology and culture, for good or ill.

We are One because evolution has made us so, and we are divided because culture arrived after biology and offered the means for separating into smaller and smaller units. But there are consequences to these two layers, especially the cultural one. Cultural separation makes humanity so very interesting, but it also fractures our sense of common good. Now, more than ever, we need the unity that evolution has provided. The differences that grow from the cultural side of humanity are no less entrenched than the evolutionary things we share as one species, but unfortunately, the consequences of those learned differences often promote conflict, mistrust, rage, and ugly division, none of which bode well for Homo sapiens sapiens, now or in the future.

We have no control over evolution, and biology is impossible to alter anyway, but we can wrestle with the beast of culture. All it takes is acknowledging that we are all designed by evolution as one species. It just takes some empathy, compassion, and interest. Maybe just a simple attitude of appreciation rather than fear.

To know ourselves is to know each other, because there is, in the end, only one family of humankind, one people, one tribe y’all, one people.*

The Evolution of Human Stubbornness

The Cultural Revolution of Eating Out