The Otherworldly Tale of Anthropologists and Space Aliens 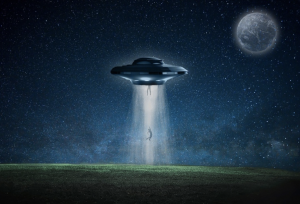 On October 4, 1957, Russia launched the first satellite, the first human-made object, to orbit the earth, calling it “Sputnik” which is Russian for “traveler.” America wanted to be the first in space — after all, the Cold War was raging, and the space race was part of that war — but it took a year before they launched a similar U.S. satellite. Those launches, and the space race in general, were signs of a massive, universal, culture shift for the human race. People started thinking about the heavens as a place for exploration, discovery, and adventure, and who knew what or who might be out there? There might even be creatures on other planets, and how would that go?

To address those cosmic questions, a social psychologist named Donald Michael gathered a group of other social psychologists, anthropologists, and political scientists to ask Americans what they thought of the space race. His “Project Man in Space” began in 1955 and ran until 1964. The aim was to speculate about other cultures that might pop up in space, and how earthlings would react. Michael had contacted Margaret Mead, perhaps the most famous public anthropologist at the time, and she was on board immediately. This space project was, after all, simply an echo of Franz Boas’s (the so-called father American anthropology) call to document “foreign” or “aboriginal” (meaning non-Western) cultures before they disappeared. Only this time no one knew where the foreigners might be, what they would look like, or how they might think and communicate.

As a recent article by anthropologist David Price of St. Martin’s University in Lacy, Washington (Journal of Anthropological Research, Fall 2020) explains, Michael asked Mead to quiz students (not because they represented the pulse of American attitudes about space exploration, but simply because they were convenient subjects) to answer questions about Sputnik and the future of space travel. Mead passed the request on to other professorial anthropologists and together they did a mini ethnography about this one subject.

Mead was all in; she and other anthropologists had cooperated with the government during World War II, explaining culture and cultures to the military who badly needed some education on that front. According to Price, Mead was a staunch anti-nuclear protester, but she seemed oblivious of the fact that the space race had clear military goals. Perhaps the thought of evaluating far-out — really far-out — cultures was just too exciting to turn down. Or maybe she saw hope for humanity in that direction.

The Project Man in Space fomented other conflicting and odd issues as it went along. Their first conference in 1958 was peppered with the rambling science fiction pronouncements of one Harold Lasswell, a scientist and a propagandist who felt people should be yanked into accepting the reality of little green men and get ready to defend democracy from aliens landing in spaceships. He didn’t want to just record American attitudes toward space, he wanted to control and guide what people thought. Lasswell was also a big fan of sending anthropologists into outer space as interpreters who might be able to communicate with aliens and better understand them because, ya know, anthropologists were obviously the chief arbiters of culture.

Mead’s contribution was more practical. Her summation of the questionnaires and interviews with students (now in her papers in the Library of Congress) framed questions about Sputnik and space as a comparison between the United State and Russia, clearly addressing the political and Cold War implication of who got into space first. Her primary goal was assessing what people thought, not telling them how to think. Popular media articles exaggerated her work, and the Project Man in Space in general, claiming that “for the first time in his thousands of years on the plant, man is consciously entering a major period of cultural evolution” (Saturday Review).

Meanwhile, Lasswell continued to write and talk about the possibility of war with aliens and he recommended that the government keep all such extraterrestrial contact secret, which of course only fueled the conspiracy theorists who continue to think the military is hiding spaceships and hapless aliens in some underground bunker.

David Price concludes that Project Man in Space was a byproduct of World War II and it was steeped in wartime history and politics. Without two previous World Wars that were destructive on a global scale which heretofore had been unimaginable, no one would have taken seriously the idea of aliens coming from outer space to get us.

These days, the military aims of space exploration race seem vague and eclipsed by the aim of gathering scientific information. Mead might have enjoyed that twist because it highlights changes in Western cultural attitudes that have maybe moved from domination or cosmic paranoia to understanding our place in nature. And if she were living in today’s economic times, Mead might also have predicted the turn toward the commercialization of space. When she said, “Never doubt that a small group of thoughtful, committed citizens can change the world. Indeed, it’s the only thing that ever has,” Mead would surely be pointing directly at Elon Musk, for good or ill.

This Is Your Brain on Conspiracy Theories