Knitters and Others are Spreading the Bern 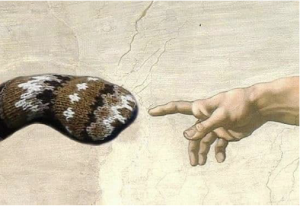 The Bernie meme is giving us all a lot of laughs now that we have a new president as well as a vaccine coming our way. There’s Bernie on the Eifel Tower, sitting in the New York subway, hanging out with Batman, and on and on. Every time I see one of these altered photos I burst out laughing, and as an anthropologist, I am also so please to see the swift cultural appropriation of a cold guy at a traditional Western ceremony turned into a cold guy everywhere on earth.

This Bernie moment is, of course, due to the internet (and so many clever minds) but it’s also nothing new. Humans have always taken bits of some other culture and passed them around, often shift-shaping those bits in the process. Anthropologists call this phenomenon “cultural diffusion” which means simply that something from one culture spreads from one place to another. In the process, the appropriating culture often improves or changes whatever it might be and then that thing or skill becomes part of that culture as if it were always there.

These memes spread by word of mouth, with pictures, or as techniques that a visitor tries out and then caries home. The process is easy to track when cultures live close to each other. For example, styles of pottery, basketry, or artistic motifs are often simple to plot out geographically across cultures, following the path of how they got from one place to another. Anthropologists are then able to make statements about how cultures change over time and how people migrate, intermarry, travel, and explore from these incidences. These studies also underscore the basic unity of humans as a culture-driven species as well as the dynamic nature of culture itself; we are always changing our ways and our traditions with new ideas gathered from others.

More deeply, anthropologists want to know exactly how and why this happens. What makes a person in a foreign place pay attention to a particular something in another culture? And why do they feel compelled to copy it and bring it home? We are also interested in what happens once the foreign cultural meme arrives because it invariably takes on a new form and meaning as it becomes incorporated into the next cultural system.

I remember traveling around Bali years ago and seeing shops with massive flights of flying wooden cows hanging from the eaves of souvenir shops. These were white cows with black spots, but cows do not look like that in Bali—they are a soft brown with no spots at all. It seems the back and white pattern was picked up from fotos or drawings of maybe English cows, or perhaps the hide pattern arrived during conversations with foreign tourists…..or who knows how the Balinese latched on to such a foreign-looking cow. They then added wings and carved the cow in a horizontal flying position which fits nicely into Hindu mythology and Balinese traditions. There are also lots of carved flying monkeys and flying angels all around Bali.

Then came my participation in this process of cow cultural diffusion. As an anthropologist, I would have preferred a culturally more accurate Balinese cow, but I bought a spotted one anyway and hung it in my kitchen in America. To me, it was a further act of cultural diffusion to pack my flying cow into my suitcase and cart it from Indonesia to America, but since I didn’t carve any spotted or otherwise patterned cows of my own, that moment of cultural diffusion clearly stopped with me.

The Bernie meme, however, represents a more successful cross-cultural moment being altered and sent around. Sure, it’s the whole picture—the old man, the slouchy posture, the mask, the coat, the manila envelope—but it’s the mittens that have taken this moment much further into the realm of serious cultural diffusion.

I know this because I knit, and the knitisphere has gone nuts over Bernie’s mittens. Instantaneously, “Feel the Bern” patterns of Bernie’s mittens showed up on Ravelry, the knitters’ great site. The originals, made from a used sweater, might have come from a hand-knit sweater or a machine knit one, but that’s no matter to knitters because they know their craft, as well as a Balinese woodcarver know his. The New York Times calls copying an article o knitting by just looking at it “reverse engineering” and those who knit well know how to engineer the heck out of a knitted piece. Professional knit designer Caitlin Hunter quickly wrote up a pattern for a short sweater that mimics the mitten pattern. By necessity, Hunter had to expand on the motif as she translated mittens into a sweater; and so just like Balinese woodcarvers, she made adjustments. Now there’s a hat pattern and I am sure there will be more iterations in the days to come.

I will be starting my “Feel the Bern” sweater as soon as the yarn I ordered arrives. Since knitting takes many hours, I fear that by the time I finish the sweater it will be March and my participation in this glorious moment of cultural diffusion will be lost in the shuffle.

That’s ok. Next winter, when I wear it around, there will still be laughs from those who remember Bernie on the Capitol steps, in a gondola in Venice, on the starship Enterprise and participating in the Bachelorette.  And I’ll have another concrete example of my part in cultural diffusion beyond my Balinese cow.